“Two-eyed seeing” is a concept that was originated by Elder Albert Marshall of Sydney, Nova Scotia, and Cape Breton University to give indigenous epistemology and knowledge equal status with mainstream scientific perspectives and knowledge. In M’iqmaq, the word is Etuaptmunk. In English, it means the idea of explanatory pluralism. Within most indigenous cultures, the mind is not considered separately from body, community, and spirituality, unlike the silos created in the dominant culture.

Healing must involve the body, the community, and the spirits. In this lecture, we are going to introduce the two-eyed seeing concept to explore how to work with trauma from both an indigenous perspective and contemporary neuroscience and psychological research. We are especially interested in the role that trauma plays in addictions and in the so-called “severe mental illnesses,” and how our approach to people in distress must also be trauma-informed.

This introductory lecture is designed for practitioners who provide counselling in indigenous communities. It is also open to those providing counselling in other communities who want to see how indigenous practices could enrich their work, as well as to others who are just curious about Indigenous cultures and mental health. 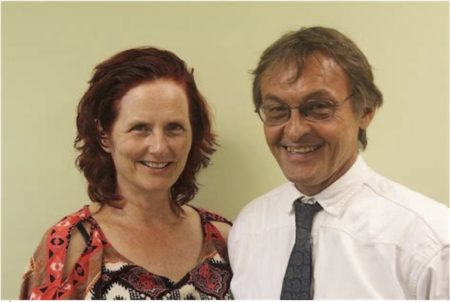 Lewis Mehl-Madrona, MD  is the author of “Coyote Medicine”, “Coyote Healing”, and “Coyote Wisdom”, focusing on what Native culture has to offer the modern world. He has also written “Narrative Medicine”; “Healing the Mind through the Power of Story: the Promise of Narrative Psychiatry”; and his most recent book, with Barbara Mainguy, “Remapping Your Mind: The Neuroscience of Self-Transformation through Story”. He graduated from Stanford University School of Medicine and completed his residencies in family medicine and in psychiatry at the University of Vermont College of Medicine. He has been on the faculties of several medical schools, most recently as associate professor of family medicine at the University of New England.

Barbara Mainguy, LICSW  studied psychology and philosophy at the University of Toronto and received her master’s degree in Creative Arts Psychotherapy at Concordia University in Montreal. She has co-written Remapping Your Mind: the Neuroscience of Self-Transformation through Story with Lewis Mehl-Madrona. Currently, she is completing her MFA in documentary filmmaking at York University, Toronto, and working with Lewis in Orono, Maine. She is the Director of Education for the Coyote Institute in Orono.

• To learn how indigenous perspectives on health and health care have wide, cross-cultural applications.
• To learn how narrative approaches to psychotherapy is are an ethical necessity when working with disenfranchised communities who have experienced severe trauma.
• To further promote cross-cultural dialogue and therapeutic understanding.

About the New School for Analytical Psychology

Our School embraces education as a never-ending dialogical process that does not hold fast to a single theory or ideology. Our approach to knowledge is one that honors the ancient yet emphasizes our embeddedness in a contemporary cultural context. An ethical obligation to the ‘other’ is a prime concern.

Our profession faces complex conditions of suffering and evolution, and each journey has a unique destiny that cannot be known in advance. The inherent ambiguity of our field creates anxiety in its practitioners, and there is a tendency to withdraw into defensive bastions of theory and practice. The New School group shares a deep concern about the fundamentalist tendencies in all analytic schools. We value the scholarship and clinical approaches of multiple traditions with their unique perspectives on our ever-fascinating, ever-evolving field of reflective endeavor.